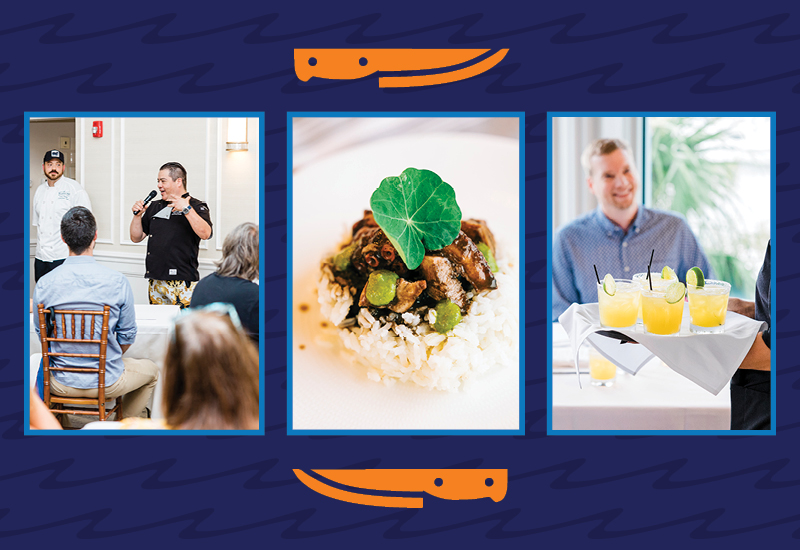 A CULINARY EVENT NOT TO BE MISSED

Top Chef fans – this one is for you! Not one, not two, but THREE celebrity Top Chefs will be joining us for dinner, alongside Executive Chef, Fabio Capparelli of Bluewater. The 7-course dinner will be prepared by BravoTV Top Chef alums, Katsuji Tanabe, Annie Pettry, and Casey Thompson who will each be cooking one of the seven courses.

Seating is limited as tables will be socially distanced, and bookings must be purchased by table. Seats are $175 per person and can be booked by calling the restaurant – 910.256.8500.

Mark your calendars for this unique dinner experience and plan to spend the evening with us over laugher and drinks, and creative dishes by these esteemed Chefs.

Born and raised in the heart of Mexico, the son of a Japanese father and a Mexican mother, Katsuji Tanabe has worked inside LA’s most acclaimed kitchens, from the four-star Bastide Restaurant to Beverly Hills’ Mastro’s Steakhouse.

Tanabe owns MexiKosher Restaurant, the first authentic Kosher Mexican restaurant in Los Angeles and arguably the first of its kind in the entire United States. He opened Barrio in Chicago in 2017, an upscale Mexican Restaurant.

Tanabe is proud to serve his community as a personal mentor and celebrity representative for Jewish Big Brothers & Big Sisters, Los Angeles, where he happily offers his time and expertise for fundraising and volunteer drives for the group, as well as regularly working alongside the children that the group supports teaching healthy eating and cooking alternatives. After competing on Top Chef season 12 in Boston, Top Chef Mexico, and Top Chef Charleston, Tanabe admits he’s addicted to the rush of the competition and is eager to prove he has what it takes to bring home the title.

Katsuji Tanabe is currently the lead for Culinary Innovation for the LM Restaurant family of brands.

An advocate for sustainability Chef Annie Pettry has become a leader in the Southern culinary scene, proudly uplifting staff, supporting local producers, and nurturing diners with her flavorful cuisine. With a nuanced palate, Pettry is known for her vegetable-forward dishes, hand-made pastas, and wood-fired cooking.

Growing up in the mountains of Asheville, N.C., Pettry’s childhood was steeped in influential food experiences including growing vegetables, foraging for mushrooms, trout fishing, and countless hours in the kitchen learning from her parents’ global cooking style. After earning a grand diploma in culinary arts from the International Culinary Center in New York City, she worked alongside acclaimed chefs, in NYC & San Francisco. In 2012 she moved to Louisville, KY to open the renowned restaurant Decca as chef-owner for close to a decade before moving back to Asheville, NC, where she currently resides.

Pettry’s work inside the kitchen throughout the years has not gone unnoticed. A 2020 James Beard Award Semifinalist for Best Chef: Southeast, A Top Chef season 14 contestant and two-time Food & Wine “People’s Best New Chef” nominee, she was the 2018 Louisville local all-star chef for James Beard Foundation’s Taste America, one of Restaurant Hospitality’s “15 To Watch in 2015,” a 2014 Star Chefs Rising Star, and the winner of the 2013 Louisville Cochon 555 Heritage BBQ competition. Pettry’s cuisine has been featured by several national food magazines including Food & Wine, SAVEUR, Garden & Gun, EatingWell, Bon Appetit, and more. Her restaurant Decca was also given a four-star review by the Courier Journal.

Pettry often steps out of the kitchen to work with charitable organizations related to her passions for sustainability, social justice, food and cooking, including No Kid Hungry, The LEE Initiative, and Change Today Change Tomorrow. She is also active in many of The James Beard Foundation’s programs as a 2020 Women’s Entrepreneurial Leadership fellow, 2015 Chefs Boot Camp for Policy and Change alumni, and a leader in the foundation’s national Smart Catch program, which aims to promote responsibility and sustainably sourced seafood.

Chef Casey Thompson is one of America’s most forward-thinking and innovative chefs. As executive director of culinary development for Sonoma’s Best Hospitality Group, Chef Casey serves as the executive chef and partner in
Sonoma’s Folktable and forthcoming Georgette. Chef Casey shot to international fame when she was a finalist on Top Chef, where she earned the “Fan Favorite” title on the Bravo flagship’s third season.

A Texas native, Chef Casey got her professional start under celebrity chef Dean Fearing at Rosewood Mansion on Turtle Creek, one of Texas’ most revered fine dining restaurants. She credits her global travels for inspiring her unconventional techniques, picking up influences from culinary destinations as far afield and diverse as Thailand and Argentina.

Chef Casey became the American ambassador for an Argentinian Malbec and cooked her way through wine country, learning the art of pairing freshly farmed foods with terroir-driven wines. Her first executive chef position was at Shinsei in Dallas. The acclaimed sushi bar and pan Asian restaurant is still thriving in the Lone Star state.

Chef Casey opened Brownstone Restaurant in Fort Worth, Aveline, and The European Bar & Lounge in San Francisco. She was the executive chef at the Inn at Rancho Santa Fe in San Diego and had a private dining business in wine
country prior to her latest Sonoma ventures. She has been a featured chef for premiere events including S. Pellegrino’s World’s Best 50 Chefs, Pebble Beach Food and Wine, Los Angeles Food and Wine, and Aspen Food and Wine.