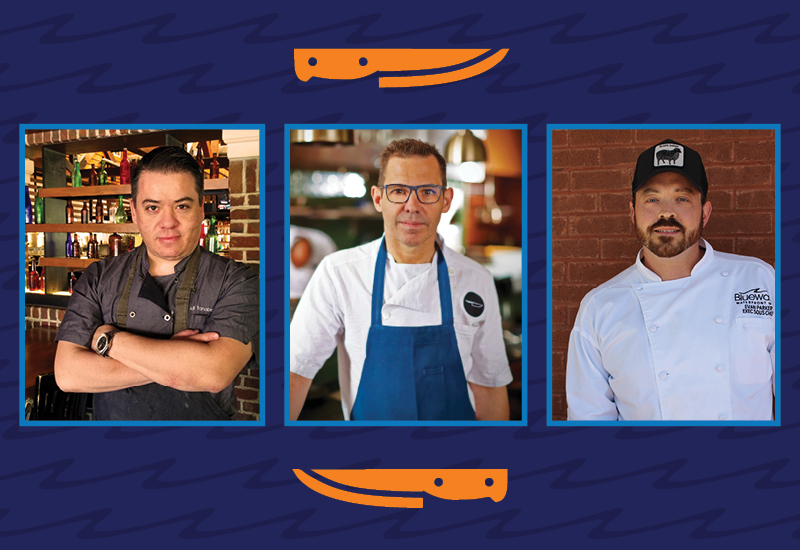 A CULINARY EVENT NOT TO BE MISSED

If you’re a fan of Top Chef on Bravo TV, then mark your calendars for a continuation of our Top Chef Dinner Series, brought to Wilmington. On Tuesday, August 3rd we will be hosting a unique dinner experience with Top Chef alums, Katsuji Tanabe, and John Tesar, and Buewater’s Executive Chef, Evan Parker.

Dinner will include a collaborative dinner experience with a 5-course menu, along with wine pairings for each dish for $125 per person. Each Chef will present their dish, and wines will be presented by Katsuji Tanabe.

Spend the evening with us, eating delicious, creative dishes prepared by these esteemed Chefs, drinking wine, and meeting these talented Chefs.

Chefs Katsuji Tanabe and John Tesar will be cooking up and sharing some dishes from their competitions on Bravo TV series, Top Chef, while Executive Chef, Evan Parker will be showcasing his creativity with unique dishes for the evening’s event.

Seating is limited as tables will be socially distanced, and bookings must be purchased by table.

Born and raised in the heart of Mexico, the son of a Japanese father and a Mexican mother, Katsuji Tanabe has worked inside LA’s most acclaimed kitchens, from the four-star Bastide Restaurant to Beverly Hills’ Mastro’s Steakhouse.

Tanabe owns MexiKosher Restaurant, the first authentic Kosher Mexican restaurant in Los Angeles and arguably the first of its kind in the entire United States. He opened Barrio in Chicago in 2017, an upscale Mexican Restaurant.

Tanabe is proud to serve his community as a personal mentor and celebrity representative for Jewish Big Brothers & Big Sisters, Los Angeles, where he happily offers his time and expertise for fundraising and volunteer drives for the group, as well as regularly working alongside the children that the group supports teaching healthy eating and cooking alternatives. After competing on Top Chef season 12 in Boston, Top Chef Mexico, and Top Chef Charleston, Tanabe admits he’s addicted to the rush of the competition and is eager to prove he has what it takes to bring home the title.

Katsuji Tanabe is currently the lead for Culinary Innovation for the LM Restaurant family of brands.

Throughout his 20+ years in the restaurant industry, which started in La Varenne Ecole de Cuisine in Paris, he has received national nods from Esquire (named for Best New Restaurants for two consecutive years), FOOD & WINE and The New York Times, has made appearances on The Today Show and The Early Show and won the inaugural season of Food Network’s Extreme Chef.

Chef Tesar worked in Westhampton, New York and Las Vegas before putting down roots in Dallas in 2007 where he has consulted for the menus at DRG Concepts’ Dallas Chop House and most recently Oak in the Design District, to name a few. Knife at The Highland Dallas is Tesar’s vision of what a contemporary steakhouse should be. Opened in 2014, the chef-driven restaurant has continued to be recognized for reinventing the steakhouse experience. Most recently Knife’s pimento cheeseburger was featured as Best Burger in Dallas on The 50 Greatest Burgers list for Texas Magazine and Best Steakhouse by D Magazine’s “Best of Big D’s” list.

Always looking ahead for the next project, Tesar announced he is working with Flatiron Books and Macmillan on a book, Knife: Modern Steak and All American Meats, that will be published in spring 2017.

Chef Evan Parker has been part of the culinary team at Bluewater over the last year, starting as Executive Sous Chef in 2020. Over the course of working with our culinary team, he has brought a passion for creative and fresh dishes, locality and seasonality to new signature dishes on Bluewater’s menu. Chef Parker defines his culinary style as refined comfort food, with a nostalgic southern twist, focusing on locality, seasonality, and sustainability.

After being a key contributor to the transformation to the menu for Bluewater Waterfront Grill, Evan took over the position of Executive Chef when Executive Chef Jeffrey Scott moved to another LM restaurant family brand.

Prior to working as Executive Chef of Bluewater Waterfront Grill, Chef Parker was the Executive Sous Chef at The Inn at Little Washington.  He has great pride in the work he completed during his time there, acting as culinary lead on the team that won the highest accolade of three Michelin Stars, reserved for “exceptional cuisine worth a special journey.” He worked side by side with the Owner and Executive Chef, winning a number of accolades and distinctions for the establishment.

When Evan is not in the kitchen cooking at home or at Bluewater, you can find him spending time with his Fiancé and Daughter at their home in Wilmington, NC.